For me, one of the most important items for predicting economic growth and future prosperity is a countries increase in ranking or position on the below mentioned table:

Please have a look for yourself how the GIIPS are ranked compared to Germany, Netherlands, Austria, Denmark etc. This is Europe 🙂

On Friday 13-9-2013 Rabobank (the Dutch bank with the largest exposure in mortgages in the Netherlands) indicated that the Dutch housing market was 10% undervalued. This was partially supported by the CPB who is expecting a recovery in 2014.

One may wonder how the Rabobank and the CPB “calculated” this forecast number as the same CPB expects that the average purchasing power will decline next year with 0,5% and expects that unemployment will increase from 8.7% to 9.25% (7.5% according to international definition?!). Including credit tightening with Dutch banks and lack of international appetite  for Dutch  mortgage funding, I guess expected interest rate will be the main driver for Rabobank its forecast model. I wonder if the Dutch government is desperately hoping for a wealth effect, as Zerohedge previously wrote about in relation to the US housing market, for the Netherlands.

Going one step further, on September 17th the Dutch prime minister will present the governmental budget plans for the year 2014. This includes a forecast on budget shortage of 3.3% of GDP for the year 2014. As mentioned earlier the CPB included an expected price increase of the Dutch housing market for the year 2014 in its forecast model. If this model also includes an expected decreased in mortgage interest rates and a subsequent wealth effect. I fear the real austerity is yet to start… We will see what 2014 will bring to us. 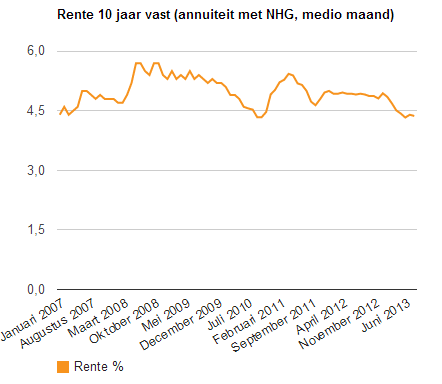 After strong numbers for July my guess is that August will bring some positive news as well. Dutch media report that the bottom of the housing market might be in sight (as they did in 2009/2010/2011 and 2012). I guess we will see what will happen. I was wondering which months are historically the strongest (for the last 18 years) and which were the weakest months? It turns out that the first 8 months of the year are strong and the last 4 months are relative weak.

The two outliers in January and July are caused by a system change in the Netherlands related to tax deductability of the interest paid.