August is a time that new economics students start as freshman and a new generation learns that deflation is bad an inflation is good. Interesting enough is that this understanding of inflation is relative new to the vocabulary of the common people.

Many people say that inflation helps an institution or person with a lot of debt. This however is not always that case as the inflation component is included in the interest that a debt holder pays over its principle loan. Indirectly a borrower partially repays its loan in real terms by just paying the interest.

Countries in general pay a lower real interest (interest – inflation) compared to the average citizens due to a lower perceived probability of non repayment. Inflation however has the same impact for both an individual person as well as for an institution. The above is true in case of monthly adjusted interest rates. If however the inflation rate increases but the interest payment (coupon) is fixed. The amount initially borrowed (principle) decreases in real value (eg. interest does not fully cover the inflation). This has happened many times when the government instructed the central bank to print additional money.

The question is if deflation changes the above, my rationale is that it does not change the above. However, a bank will not borrow money to a person or institution in case that a bank has to pay that person to keep its money. This is likely the problem in the banking structure we have today.

Savers on the other hand will not stall their money at a bank when they have to pay the bank to keep their money (also taking into account the counterparty risk (bank default) a saver always has). I see no downside for the people in general if this happens.

The banking sector will then likely shrink to historic proportions of the total economy. In the short run consumer spending will likely decrease, due to decreased availability of consumer credit. On the long run this will lead to increased investments in capital goods.

The above will likely result in increased austerity within governments (government debt is set-off against GDP), which is something governments are not good at. Consumers however are much more able be flexible in their spending behavior.

It might take some years until the economy normalizes, however it is more likely to result in a sustainable future compared to the last century with high inflation.

Trends in the below inflation chart are explained in the other article I have written: Government Debt and Personal Wealth – USA. One can see that long term inflation was “invented” in the 20th century. 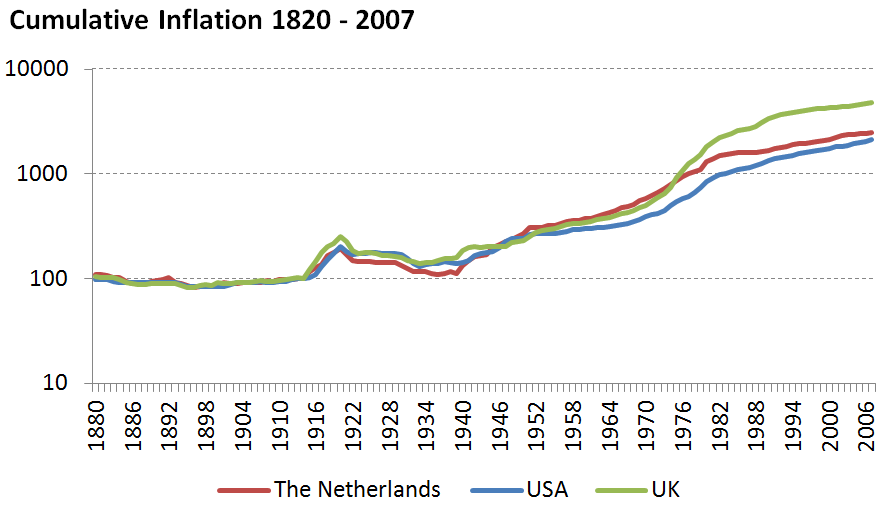