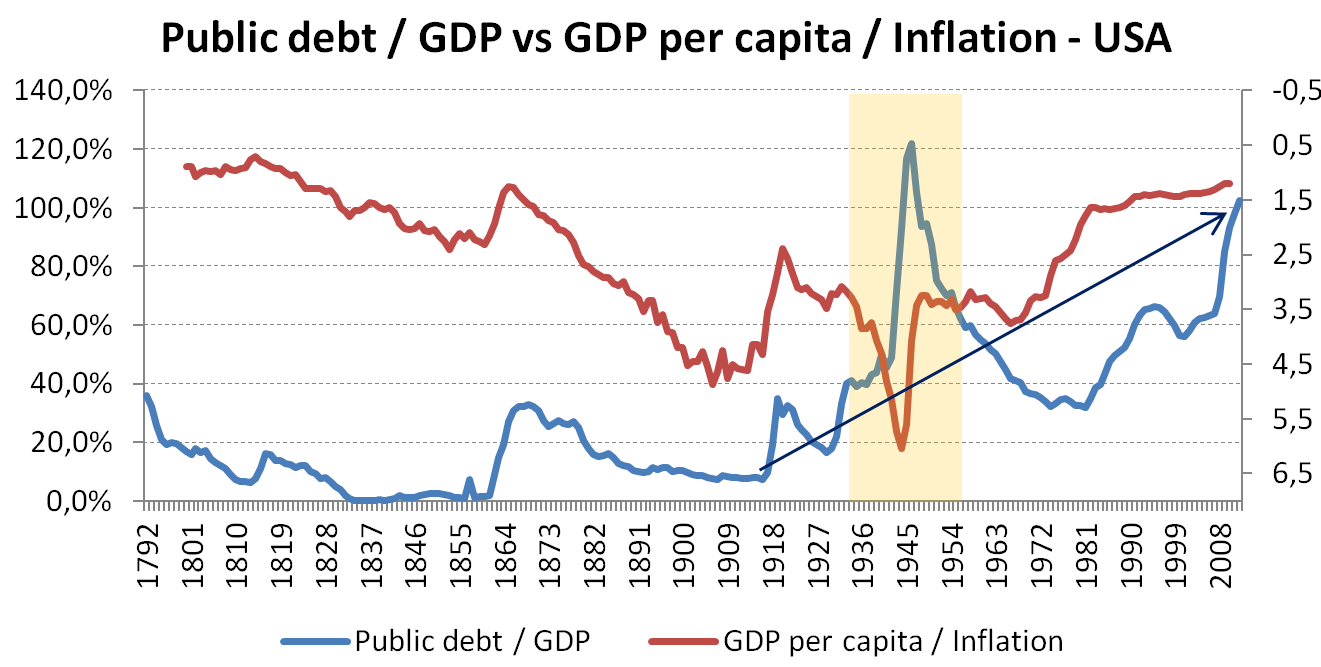 During my time at the University in Amsterdam, I’ve learned that inflation is key for a healthy economy. Negative examples of lack of inflation (or deflation) has always been Japan, a theme relevant again since the financial crisis, which lead to limited inflation in European countries. News agencies have stated that one of the key qualities of Bernanke, which lead to his appointment of Chairman of the FED, has been his in-dept research on alternative tools the central bank of Japan could have used to fight deflation (i.e. increase inflation). Other literature also indicates that inflation increases consumer spending as a dollar earned today will be worth less in the future, increasing direct consumption and decreasing savings.

I’ll try to briefly touch base on the above topic to inform you about inflation. I’ll let you decide if inflation is a good thing.

In my view inflation leads to a decreased saving appetite, increased spending on consumption goods and decreased spending on capital goods (which are in general more expensive). Inflation leads to increased credit demand (mortgages / car loans) as a consumer loses purchase power on saving money for expensive capital goods like cars and houses. Inflation may lead to a short term spending horizon, which in addition leads to increasing spending on consumption goods. Inflation together with advertisements are in my view one of the main drivers on our consumer society, which is unsustainable in the long run as resources are limited.

One might say that inflation is good for consumers as most people have high mortgages. With high inflation the mortgage stays the same, but the housing prices increase with inflation in the long run > decreasing the loan to “home value” (LTV) ratio over time. One might forget that the consumer compensates the bank for inflation in its annual interest paid (I’ll explain this later). This only works in a society in which consumers have high debt. A situation with zero inflation would considerably decrease mortgage expenses and decrease debt as financials headroom is used for loan repayment instead of inflation compensation.

How does inflation influence interest rates?

Is inflation the main driver for market’s need for interest swap derivatives?

Why is there inflation?

Inflation happens when money/credit supply exceeds adjusted demand for goods/loan redemption. Simply stated; if the world has (1) 100 inhabitants and (2) there are 100 dollar in circulation in the economy and there is (3) one apple tree which provides 100 apples each year and (4) all an inhabitant needs is 1 apple a year and (5) all inhabitants work at the tree company and earn 1 dollar a year. The price of an apple is 1 dollar. When a bank is incorporated and provides 50 dollar credit to the inhabitants (without any interest) the second year (one might want more then one apple), there are now 150 dollars available in the economy. With a stable supply of 100 apples, the price for an apple will slowly increase to 1,5 dollar.

Who benefits from inflation?

In an ideal world with 0 short term and long term inflation, a person borrowing money would pay for non repayment risk as well as opportunity cost to the person/bank he borrows money from. The risk on non-repayment decreases when the person buys a home from the loan as this will increase the collateral. When the market value of the collateral is close to the loan amount, non-repayment is limited when the Lender has a pledge on the collateral. (selling the home will result in repayment of the loan). A result of a pledge on the above collateral will result in a lower interest the person has to pay to the Lender (close to the opportunity cost).

Now one example:
Option 1 with zero inflation: Now lets say the above person has to pay 2% interest rate for a 30 year loan to the above Lender. In addition the person repays the total loan in 30 years (3,33% per year). After 30 years he has fully repaid the loan and he owns the house.

Option 2 with inflation: Now lets say there is a 3,5% long term inflation. The lender wishes to be compensated for the 3,5% inflation in addition to the 2,0% interest rate. The Lender now has to pay 5,5% interest rate per annum and had no money left for loan repayment. After 30 years of interest payment. The person still had both a home and full loan amount. In purchase power however the loan decreased with 3,5% over 30 years = 65% or in other words. If the house would have cost the Lender 100 dollar, the house would now be worth 100 x 3,5% price increase per annum = 280 dollar.

In a next topic I’ll continue on the question who actually benefits from inflation.